It can be difficult to enjoy a nice hot shower when you can’t get enough water pressure. Whether you’re looking for a quick fix or a more permanent solution, there are ways how to increase the water pressure in your shower. From installing an inexpensive shower head or adjusting the height of your spout, here are some ways to get the most out of your next shower.

The best ways to increase water pressure in shower are:

Before we go into detail with the above 9 fixes to a low shower water pressure, lets go into looking at water pressure within the household in general.

What is a Normal Water Pressure in a House?

The best water pressure for most household plumbing is 50 pounds per square inch (PSI) which will achieve an optimal flow of water. However, when the pressure is less than 40 PSI will become obvious when you turn on a faucet or shower, as the flow rate will be low.

How Can you Measure your Home Water Pressure? 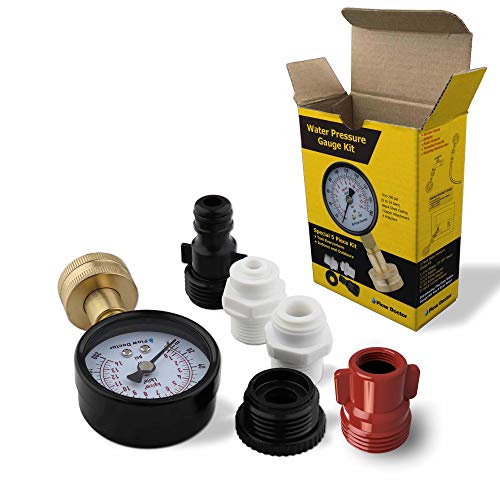 What is a Normal Shower Flow Rate?

Shower head manufacturers have been limited to a maximum flow rate of 2.5 gallons per minute (gpm) due to Federal government regulation. In fact in California, Hawaii and Washington, the flow rate is even less being limited to 1.8 GPM.

How can I measure the flow rate of my shower?

Possible Causes of your Water Pressure in your Shower Being Low

This section of our article provides some troubleshooting to locate possible causes of your shower pressure being low.

If you live in or close to a city or town center, you may have noticed that your shower pressure isn’t as great as it could be. One of the causes might be the mains water system.

Due to mains water systems in city and town centers using much older pipes, water pressure might not be as strong as those on new water pipes.

Replacing these old pipes is easier said than done for the local government, as doing so might disrupt everything in the city center.

2. Your Water System Supply May Be Undersized

Having undersized supply piping is another common reason for low water pressure.

This problem is common among old houses that still have their original plumbing system in place. If your water system supply is undersized, you’ll end up with less water to work with and that means that your shower will be less powerful.

Again, because replacement is challenging to do with these water systems, the previous homeowners plausibly didn’t correct the dilemma during their stay.

3. The Water System May be Clogged

Just as stated before, you are possibly using older, iron piping for the water system in the house you are staying in if that house is an old one.

Iron is susceptible to rust and corrosion which means pieces of it can break off and cause your water system to be clogged. Another problem which the old pipes will give you is the possibility of sand, gravel, and dirt entering your system, which will make matters worse.

4. Water-saving Showerhead May Limit the Flow

One common reason that is often overlooked is the showerhead. Modern showers often use “flow restricting” or “water-saving” showerheads.

One other common reason for low water pressure in your showers that is sometimes disregarded is the kind of shower head you’re using. Some of the new shower heads these days likely have flow restrictions and water-saving properties.

Flow restricting showerheads were first introduced in 1992 under The National Energy Act in the United States.

These flow-restricting showerheads have been manufactured in the UK under the inspiration of the United States as an attempt to assist homeowners with their water bills and prevent people from wasting water.

Another common reason that you may be experiencing low water pressure is an obstructed shut-off valve.

Whether you’ve just got a building done or you’ve got yourself a brand-new home, you have to make sure your shut-off valve is completely open and not blocked by some sort of obstruction.

You can usually find the shut-off valve below the sink in the kitchen. Contact your trusted plumber immediately should you suspect your shut-off valve to be broken or damaged.

Solutions to increase the water pressure in your shower

Now before you go and unnecessarily spend money on a new shower pump or pipes, try checking your shower head and clean off any sand or dirt.

These small sediments can find their way into your water system through the mains and over time can build up and slow down your shower head’s water flow.

There is an alternative course of action should your shower head be unremovable. You’ll need one sandwich bag and one rubber band. All you have to do is fill the bag up with vinegar and tie it to the shower head using the rubber band. This will help in breaking down the sediments and limescale.

New showerheads often come with flow restrictors that can limit the amount of water that comes out of the shower. This is intended to save money, but it also can hinder you from getting the heightened water pressure you’re looking for.

Flow restrictors work in some homes, but not in others. If you have a water pressure problem in your home for some known or unknown plumbing reasons, or if you live in a rather old house, a flow restrictor will only make things worse.

If your showerhead is fitted with a flow restrictor, or when it comes to modifying your existing shower to have a better pressure or removing your flow restrictor, you should read the instructions in the user’s manual.

Kinks in the Hose

It’s important to prevent any kinks in shower hose, especially if you like the water pressure to be strong and precise when you are going for a wash. Kinks will make it harder to wash yourself and also might cause damage to your hose.

Luckily, it is relatively easy to free your shower hoses from kinks as long as you locate them.

Verify that the shut-off valve is fully opened, well enough to allow water to flow through it. This will then determine the amount of pressure you can achieve.

Eliminate Leaks in your Pipes

It is important to eliminate pipe leaks quickly and efficiently. Not only is very costly and not easy to detect but can cause unnatural pressure that will lead to more damage being done by the water flowing through the pipes. It is always better to keep looking for leaks in your plumbing system.

Should you find a leak, immediately call a professional plumber to deal with it to avoid further inconveniences.

You might not realize it, but your hot water heater ages just like you do. Over time, sediment builds up in the bottom of your water tank and clogs the heat exchanger. This slows down water flow and creates inconsistent heating patterns. Improperly flushed water heaters also tend to run longer than necessary, which can get expensive.

The fact that sediment buildup in your hot water heater means you’re stuck with low water pressure and inconsistent heating patterns for the lifespan of your unit. The good news is there’s a simple solution: periodic flushing and descaling will keep your hot water system operating at its best and save you money in the long run.

These low-pressure showers deliver nearly 90% less flow than the conventional ones and use only 2.5 gallons of water per minute. This ultimately results in savings of money and reduction of carbon footprint.

Turn off other Appliances

You are much more likely to experience low water pressure when you are showering if you are running other appliances in your home at the same time.

Experts recommend keeping your showers short and sweet and shutting off your faucets, toilets, and other appliances while you’re washing up. Doing this, you will immediately notice a difference in water pressure.

Shower pumps are small devices that are incorporated into your home’s water system.

The shower pump is activated the moment you turn on the water in the shower. As water travels from a tank to the shower, it first passes through a pump. The pump then makes use of an impeller, much like the engine of an airplane, to boost water pressure just before it gets to the shower.

It is important to know that putting a shower pump to mains water pressure directly is illegal, as the pressure added by the pump could damage the mains pipework. You will need to put in a break tank. You can do this yourself or ask assistance from a plumber.

We hope that this has assisted in you working out how to increase water pressure in your shower. Happy showering!