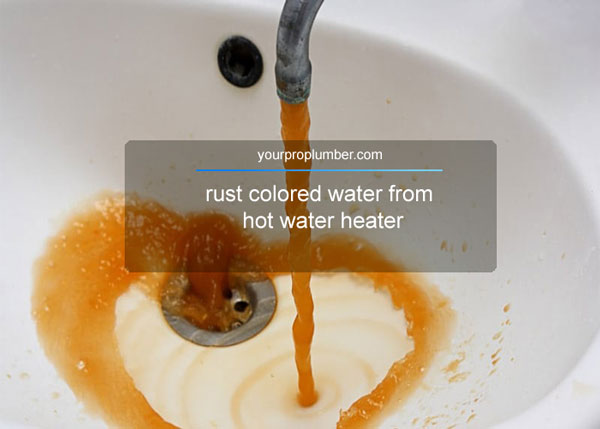 The rust colored water from hot water heater” Solving electrical and gas hot water problems in rusty hot water. What is the reason for discoloration and why do I see rusty or brown water coming out of the tap or bathtub?

With the first signs of discoloration of hot water, rust or brown is often found, and many consumers think that their gas or electric heaters are corroded. So, does a rusty tank or something else lead to a rusty liquid result?

Causes of the appearance of rusty hot water

You May Like: 7 Different Types of Toilet Seats: Which Is Right For You?

Corrosion of the water heater tank

If you look at most of today’s tank heaters, whether electric or gas. You will see that almost all heaters are equipped with metal cans. The inner surface of the metal tank is exposed to different water conditions, and corrosion is one of the possible problems.

To prevent corrosion and rusty tanks the manufacturer will cover the tank with a ceramic coating of glass treated at high temperatures. This technology prevents oxidation of the tank. Anode rod is another element used to protect metal parts from corrosion.

If, for any reason, the glass coating is broken. Hot water can come into contact with the metal, start a chemical reaction and after a while corrode the tank. Each time during the extraction of hot water. The water comes into contact with rusty spots developed in the tank. It is contaminated and the brown color returns.

Rusty particles and dirt from the water supply can also accumulate at the bottom of the water heater. When you turn on the heater, the sudden movement awakens the water, making the hot water look golden on the tap.

Bacteria as a result of rusty hot water

Iron-reducing bacteria, which are usually found in soil, wells and water distribution systems, can make the water look rusty. Soluble iron is a food bacterium that, due to lack of oxygen and no movement inside the tank, will reduce the efficiency of anodes and accelerate corrosion.

Main pipes made of cast iron or metal pipes can also rust, delivering dyed water to your home when used. To confirm the water problem in the municipality, first check the surroundings and see if your neighbor has the same problem. If other homes are affected, the only thing you can do is rinse your plumbing system for at least half an hour. You can repeat several times until the water flows clear.

It is also possible to make repairs on the main supply line, or even break on the road. Since rust accumulates in the water pipe, when the fire hydrants in the area are washed (or use firefighters), this interferes with the normal flow of water and collects rust particles, which eventually enter the sink or shower.

If the pipe in your house is connected to the well system, the water inlet can bring deposits of clay, dirt and sand. If the central plumbing system is disrupted, or if a new house is built in the area, dirt, dirt and clay will enter the plumbing system and mix with water, resulting in a brown or rusty appearance.

In addition, any interference with sediments in the tank can result in brown particles in the water.
Now, since your heater is located between the tap and the central pipe, it will collect dirt from the external supply pipe, hot water will have this rusty or brown color.

Rust usually forms sediments precipitate at the bottom of the pipe. As soon as the pressure inside the pipe changes (increases) or something more awakens, they eventually appear on the tap. Pipes are deteriorating.

If your pipes use galvanized pipes, they can corrode over time. However, if the pipes are made of copper or plastic pipes, then you need to look for the cause elsewhere.
Pipes can also crack, so dirt can enter slowly, contaminate the water and make the water look rusty.

One of the solutions for rusty hot water, excluding harsh conditions such as rusty water tanks. Its to completely drain and rinse the tank through a drain valve. If the heater box and plumbing system are infected with bacteria. Instead of chlorine shock therapy, rinse, it should be used.

Most often, the heater is attributed to rusty hot water and other color changes. Please note that both electric heaters and gas heaters are made of glass coating of high-quality cans, so cracks in the coating are rarely seen will allow water to touch metal cans and corrode.
If your water heater is more than 10 years, hot water often appears brown, it’s time to replace it.

Most often, rusty hot water is not harmful, if you want to take a bath or brush your teeth, but it is not recommended to drink, it will discolor dishes and clothes. You can’t see, it’ll smell and taste bad. To avoid more series of problems, it must be taken care of in time. Heater manufacturers recommend regular maintenance, such as rinsing, removal of deposits and rust, to ensure better performance and extend the life of the equipment.